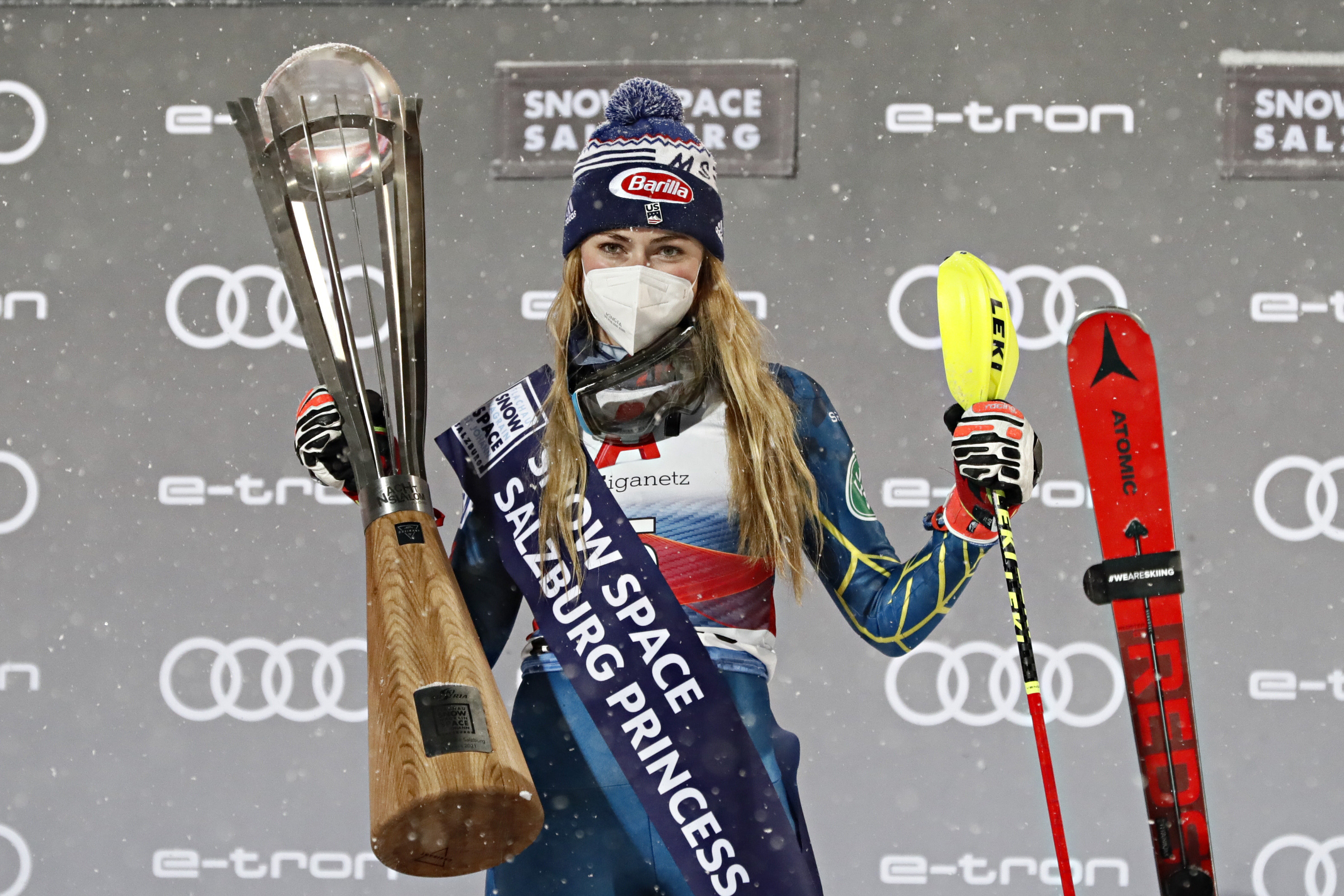 Shiffrin led the race after the first run by just .08 seconds, but after a remarkable second run by the Austrian hometown favorite Katharina Liensberger, there were thoughts that Mikaela would just be racing for second place. Instead, Shiffrin found the classic Shiffrin extra gear to hammer into the finish—and when she looked up to see that she won by .19 seconds, she let out an uncharacteristic celebratory scream.

“I felt inspired; I just felt alive,” said Mikaela. “I just was pushing. I wish I could explain. The second run, that was maybe the top slalom skiing I’ve been able to do in a race.”

Wendy Holdener of Switzerland was third and Petra Vlhova of Slovakia—current overall and slalom leader—was fourth.

While Shiffrin is never one to speak to records, she broke a number of them with her win in Flachau. It was her 44th career slalom victory—giving her the most wins for a female in a single discipline—and her 68th career World Cup win, which propels her into third place on the all-time victory list, surpassing Austrian Marcel Hirscher and putting her only behind Ingemar Stenmark (86) and retired teammate Lindsey Vonn (82). It was also her 100th career podium. Oh, and Shiffrin is still only 25 years old.

Though Shiffrin had won in Flachau three times in her career before Tuesday night, her last slalom victory was December 29, 2019, and she said she’s still finding the right mindset on the World Cup circuit again. “It takes a different mentality—and I’ve been learning that again this whole season,” she said. “There’s a couple of steps. A lot of things have happened, including getting more time in training, getting more time thinking about my mindset, and thinking about all the pieces that go into race day that we don’t have to experience in training. All those things came together tonight. It’s amazing, but it doesn’t mean it’s fixed yet. But tonight was really really good.”

Land Rover U.S. Alpine Ski Team athlete Paula Moltzan also had a banner day, snagging ninth place to take home her best World Cup slalom finish. She loves the venue, having previously scored her best slalom finish in Flachau in 2019 with 12th place. “I’ve always just loved racing here—mostly because it feels like home,” said Moltzan. “I grew up in the Midwest. I trained at night under the lights every day—I thought it was weird to ski in the daylight. This just feels like coming back home and it’s really special to have my best result in slalom here again!”

AJ Hurt also got a second run, skiing intelligently to take 29th place and score her first slalom points. In her first full World Cup season, she has now scored in four events—giant slalom, super-G, parallel, and slalom. And the young 20-year-old Squaw Valley racer is hungry for more this season.

This was the last World Cup slalom prior to World Championships. The women’s tech team heads next to Kranjska Gora, Slovenia for two giant slaloms on January 16 and 17, replacing the Maribor races that were canceled due to lack of snow.