"It was one of my big goals to win in every discipline when I first started racing!" 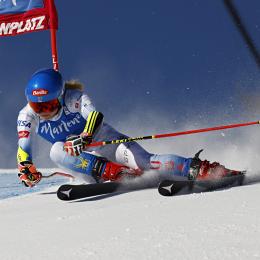 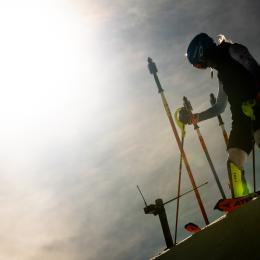 She topped herself again in 2014, earning five more World Cup wins, giant slalom podiums, an Olympic gold medal, and a second-straight slalom title. In 2015 she really wowed us–successfully defending her World Championship slalom title on home turf under immense pressure at Vail/Beaver Creek, and then snagging her third-straight slalom title. During the 2016 season, Shiffrin sustained a knee injury during a warm-up run in Are, Sweden in December and was sidelined. That didn't stop her for too long, though–she came back and went on to win all of the remaining slalom races she competed in on the World Cup tour.

Shiffrin's career success has her well on her way to full-on legend status (if she's not already there), but her 2019 season was one for the books, as she shattered records every weekend she hit the mountain. Her mind-blowing achievements turned heads from major mainstream publications, including The Washington Post to ESPN, USA Today, and beyond who deemed Shiffrin the "world's most dominant athlete" placing her amongst the upper echelon of athletes, like Serena Williams, LeBron James, and more.

Shiffrin's meteoric rise into the World Cup elite wasn't a surprise to anyone who's been paying attention. With the work ethic and passion of a veteran, Shiffrin posted her first World Cup starts as a 15-year-old and nearly scored her first points. Her first podium happened a year later (2012), and then she let loose. Here’s a summary of her past nine seasons:

With both tech and speed disciplines now in her arsenal, she’s a legit threat in every discipline she enters. Safe to say…the future is bright for Shiffrin.

FIRST TRACKS
Mikaela was getting freshies down the family driveway at age three and quickly graduated to running gates at Vail.

"When I was a J5 I did a lot of free skiing and I actually didn't like free skiing. I just thought it was a waste of time and I would've rather been training or directed free skiing. I always wanted to be thinking of something, whether it was 'arms forward' or my parents had a saying 'knees to skis and hands in front'–it's been drilled into my head and every time I get on snow that's what I start thinking. I did free ski a lot. I did do a lot of drills. It was probably 1/3 free skiing, 1/3 drills, 1/3 gates, and I did a lot of mogul skiing. I loved skiing the bumps, just the rhythm, trying not to eat it on a bump was really fun for me."