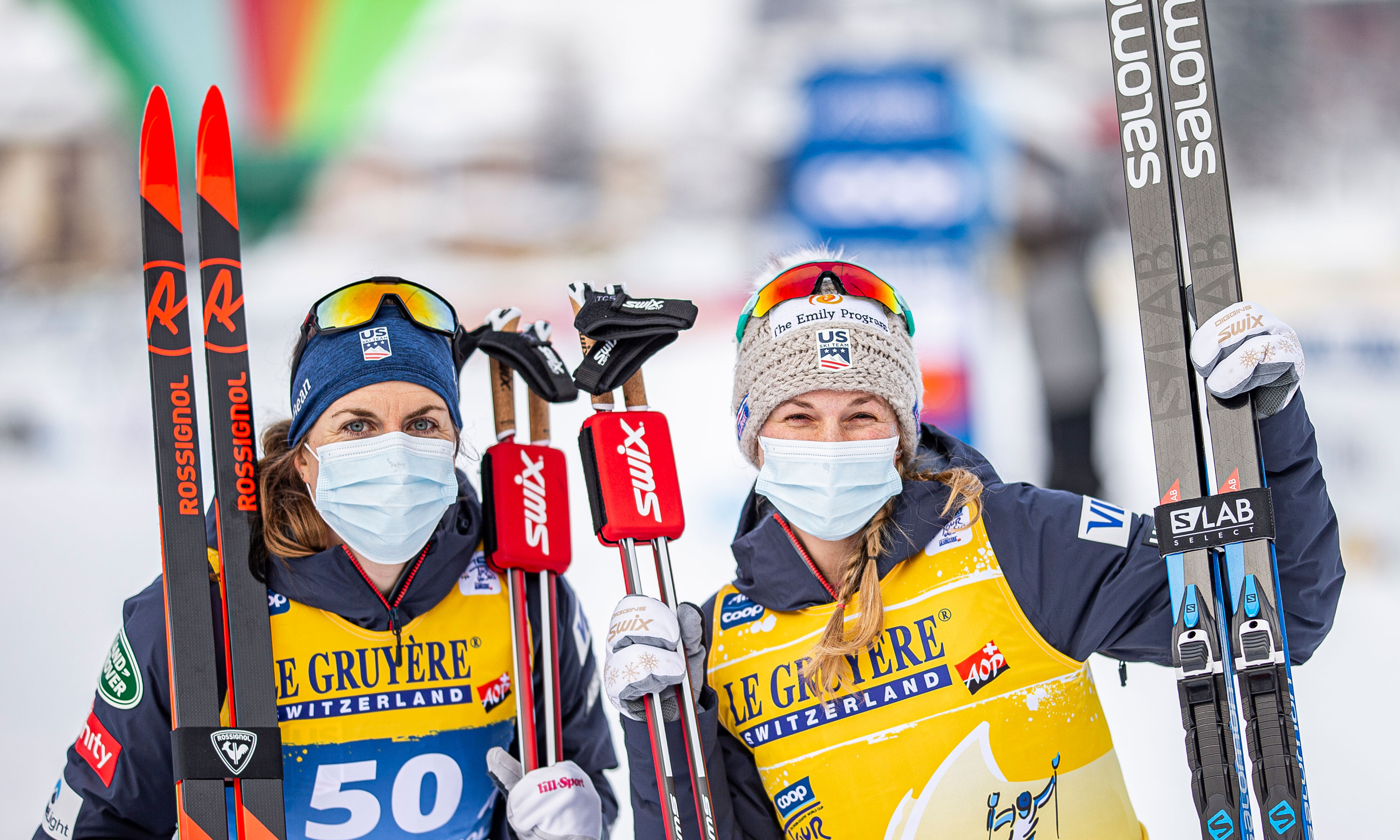 For the second-straight race, the Davis U.S. Cross Country Team made history with Jessie Diggins and Rosie Brennan finished 1-2 again and leading five American women into the top 25, this time in the fourth stage of the FIS Tour de Ski 10k freestyle in Toblach, Italy. Gus Schumacher skied an impressive race, leading the U.S. men in the 15k freestyle and finishing a World Cup career-best 14th.

“Getting a win here in Toblach is so special to me because this is where my first (individual victory) came during the (2016) Tour de Ski,” Diggins said. “It was also special for me to have this be my 30th (World Cup individual) podium because it feels like a full-circle moment. Just like a super cheesy Netflix show!”

Wearing the yellow Tour de Ski leader’s bib, Diggins started last in the only interval start event of this year’s Tour. However, she had a huge advantage chasing her teammates with Kern starting 30 seconds ahead, Brennan one minute, and Ogden one minute, 30 seconds. Racing under sunny skies over fast snow, Diggins powered from the start, catching Kern at the 2.1k mark and keeping both Brennan and Ogden in her sights.

“I loved getting to ski with Julia and having the four of us girls starting right in a row made the start pen such a psyched-up vibe!” Diggins said, adding that “I smiled and had fun and kept the pressure off, just saying to myself ‘this is my favorite course and I'm going to go out there and see how fast I can ski it!’”

“The course here is challenging with lots of climbing in the beginning and then lots of downhills that require a lot of work and aren't terribly restful coming back into the stadium,” Brennan said, adding that the individual start is her preferred event format. “Knowing that I wanted to make sure I didn't waste time getting down to business but also wanted to be sure I had enough in me to push all the way to the finish. I felt I did this well and skied a very consistent race, but it was not enough to not lose time to Jessie, especially on the working downhills which I consider her to be best in the world at.”

Diggins posted the fastest time at every interval, with Brennan moving into second at the 3k mark and holding that advantage all the way into the stadium to finish second at 14.8 seconds off Diggins’ winning time. Sweden’s Frida Karlsson was third at 1:02 back.

“I left it all out there and am happy with the way I skied,” Brennan said. “If I'm going to lose a race, losing it to a teammate is not a bad way to go! More importantly, I gained some time in the overall standings on everyone except Jessie, so for the long game, it was a good day. I feel that I am holding up well at the halfway mark of the Tour and really hope I can continue to fight hard in the second half. We made it another day with America 1-2 and that in itself is something to celebrate!”

“So proud of Rosie and how she’s been crushing it all year, and loving every podium we get to share together,” Diggins said. “Also, so pumped for Gus for his breakthrough race today! It’s so cool to see this team on fire.”

Schumacher’s result Tuesday moved him up to 25th in the overall Tour de Ski standings. Scott Patterson is 37th overall and Bolger is 51st. "It feels good to have that validation, and fun to have it midway through the tour," Schumacher said. "Definitely starting to feel the fatigue, but I’ve got a lot of energy left to finish this out with hopefully a few more good races."