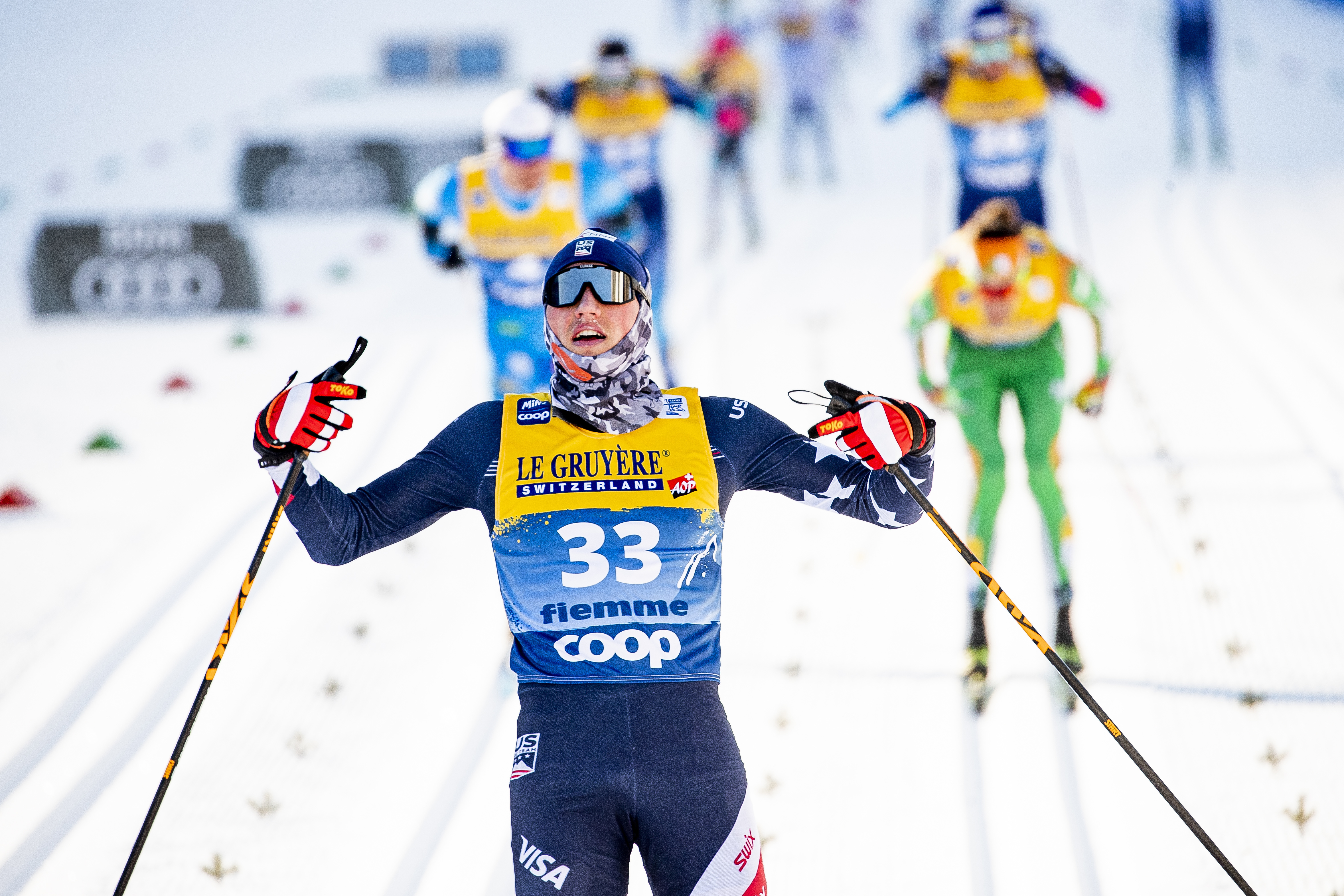 Gus Schumacher, who finished eighth in stage 6 at the recently completed Tour de Ski, is among 22 U.S. athletes named to the 2021 U23/Junior World Championships team. (© Modica/NordicFocus)

U.S. Ski & Snowboard has named deep and experienced teams to represent the United States at the 2021 U23 and Junior FIS Cross Country World Championships Feb. 8-14 in Vuokatti, Finland.

Gus Schumacher, Hailey Swirbul, and Hannah Halvorsen lead the way for the Davis U.S. Cross Country Ski Team and the 22 named athletes, and eight alternates, for the upcoming U23 and Junior World Championships. Swirbul earned her first FIS Cross Country World Cup podium in Davos, Switzerland, in the 10k freestyle on Dec. 13, and recently finished 18th overall in her first FIS Tour de Ski. Halvorsen returned to racing this season and scored her first career World Cup points, finishing 23rd in the sprint in Dresden, Germany.

Last year U.S. athletes earned 10 World Championships medals, including the Junior men who successfully defended their team relay gold medal, while the Junior women won the team relay silver medal. Three members of the men’s team move up to the U23 ranks, including Schumacher, Ben Ogden, and Luke Jager. The fourth member, Johnny Hagenbuch, will compete as a junior for the final time this season. Sophia Laukli, a member of the junior women’s relay team moves up the U23 ranks this year, while Kendall Kramer, Sydney Palmer-Leger, and Novie McCabe will all compete as juniors this season - all of whom are considered medal contenders.

“The current strength and depth of our ski nation are represented in this team of athletes,” said U.S. Ski & Snowboard Cross Country Development Coach Kate Barton. “I am most excited to see an experienced group of U23 athletes leading this team into a championship event, supported by an equally strong, determined, and capable group of junior athletes.”

The ongoing COVID-19 pandemic has presented some challenges in selecting this year’s teams. In September, the cross country community decided to cancel all national-level competitions in favor of a more regionally focused competition calendar. This decision allowed athletes the individual choice to travel, or not, based on individual circumstances. Thus, U.S. Ski & Snowboard maintained the written objective selection criteria such as top 30 World Cup, and sub-50 FIS performances for men and sub-60 FIS performances for women. For the remaining nominations, U.S. Ski & Snowboard committed to a discretion-based system where both historical and current seasonal performances through January 3, 2021, would be included in the selection evaluation.

"Programs and coaches across the nation are doing a great job continuing to support and progress their developing athletes in this unique year. And despite all of the adversity, I'm inspired by the dedication the athletes have put forth toward their own improvement,” Barton added. “I miss head-to-head racing and national-level events, but I am more grateful than ever for the opportunity to come together as one team to compete with this group of athletes and staff against the best competition in the world.”

"Thank you to our member clubs that continue to elevate our athletes as well as the National Nordic Foundation for their ongoing support of Cross Country Development projects like the Junior and U23 World Ski Championships," noted U.S. Ski & Snowboard Cross Country Sport Coordinator Byran Fish. "Our goal continues to be to provide experience and critical opportunities for the future of our sport. Thanks to NNF's financial support to allow these projects to be well-staffed for international success and yet still be financially feasible for our athletes.”

The following athletes have been selected to represent the United State at the upcoming FIS U23 and Junior World Nordic Championships. Hailey Swirbul earned her first career World Cup podium in Davos, Switzerland, and was named to the U23 World Championships Team next month in Finland. (© Modica/NordicFocus) Hannah Halvorsen scored her first World Cup points in the freestyle sprint in Dresden, Germany, and was named to the U23 World Championships Team next month in Finland. (© Modica/NordicFocus)