Editor's Note:
Breezy Johnson (Victor, ID) recently sustained an ACL tear that has sidelined her for the 2019 season. Throughout Johnson's road to recovery, she'll be sharing the ups and downs of rehabilitation here in a column of her own, entitled "Patient Notes," in hopes that you will follow along for the journey to learn how challenging it is both physically and mentally to return to snow at the elite level. Being an injured athlete can be challenging and lonely, and we're hoping that by writing this column, Johnson will be able to stay connected to the community and her sponsors.

Johnson will go into surgery tomorrow and plans to write a post-surgery update. She's thankful for your support and invites you to follow along on her Instagram. All of the words below are Johnson's thoughts, prior to finding out about the ACL tear, straight from her journal to your computer screen.

I’ve been in this sport for a long time...more than 15 years of racing now. I have watched countless teammates, friends, and fellow competitors go through this injury. Long ago I came to terms with the fact that it would come for me too. But knowing that it would come and that it did are two different things. Anterior Cruciate Ligament (ACL): the three little words that so many ski racers have experienced there’s barely any of us left on the World Cup without scars on our knees.

To back up, I crashed five days ago. For me crashing and spectacularly go together like peanut butter and jelly—and this crash was no different. Maybe I’ll send it in to Slalom Tokyo Drift…I feel like perhaps others should enjoy that moment, or perhaps others shouldn’t watch people’s seasons end. We will see. Anyway full yard sale later I sat up (gotta make sure the coaches know you are alive) and did my standard body check. Crashes for me have so much going on it usually takes me a minute afterwards to feel the pain. Feet, hands, shoulders, knees. I felt your standard beat up that you get when you crash at 60mph but not too bad. My shoulder hurt, but I’ve injured my shoulders before so I knew it would be fine. I had a busted lip and a bloody nose so I quickly set to trying to keep my suit from getting covered. My knee hurt a tiny bit but I’ve been though MCL tears, LCL tears and tibial plateau fractures and this pain was nothing I couldn’t handle. Really, I felt fine.

The doctor checked my knee but determined that it was probably fine. Two runs later and several instances of instability and I decided I was not fine. But I didn’t feel terrible either. The check engine light may have been on but there were not warning lights blaring in every direction, or at least I didn’t notice them.

Now here I am sitting on a plane headed home. An MRI showed a 30 percent partial ACL tear but our doctors didn’t like the Chileans’ findings. The later knee tests didn’t feel as good as the first to our doctor. They want to do their own tests and make sure that 30 percent really is 30 percent. Perhaps you’ve been here too. I guess part of writing this is coming together as skiers who risk our knees every day. Skiers, many of whom have sat where I am sitting now—hoping beyond hope—a little voice in the back of our heads nervously chewing imaginary fingernails and saying ‘Has my luck finally run out?’

I’m scared. I’ll admit it. I’m scared to the point of waking up in a cold sweat forcing extension of my knee to try to prove something to myself. I’ve been here before. Two springs ago I was told by a team doctor, ironically one of the same doctors who looked at me this time, that I had torn my ACL. I forced myself not to hope. I didn’t want to get my hopes up just to have them crushed again. For almost 24 hours I told myself I had torn it. I quashed the voice of hope relentlessly and unequivocally. But then it turned out it wasn’t torn.

Now, two years later, I just can’t stop myself from hoping against all odds. Not because they were wrong once before, but because then it was March and now it is September. Tearing my ACL now means a season. Then it meant September return to snow. I have so many goals. Goals I haven’t even written down yet (I usually write goals half way through my September camp). It’s not an Olympic year. I did that already. But the reality is that I love the World Cup. In some ways, I love it more than the Olympics, and the thought of missing a season with the best competitors, of waiting another 14 months to feel the rush of a ski race is just more than I can bear.

I don’t have answers for myself. I don’t know what I will do but perhaps just writing down my fears and hopes is enough. Perhaps hearing your stories will help me come to terms with my own issues. I know that even if it is torn, it’s not the worst news. I know teammates who have done much, much worse. I know that knee injuries are still relatively lucky in the grand scheme of life and death. But that doesn’t mean I won’t still miss this sport. We will see in a couple of days if I need to write another one of these. Maybe I will have dodged the bullet again, maybe not. Johnson poses with teammates Laurenne Ross and Alice Merryweather in El Colorado, Chile, prior to sustaining her season-ending knee injury. Johnson will miss skiing the World Cup and traveling the world with her teammates during the 2018-19 season. 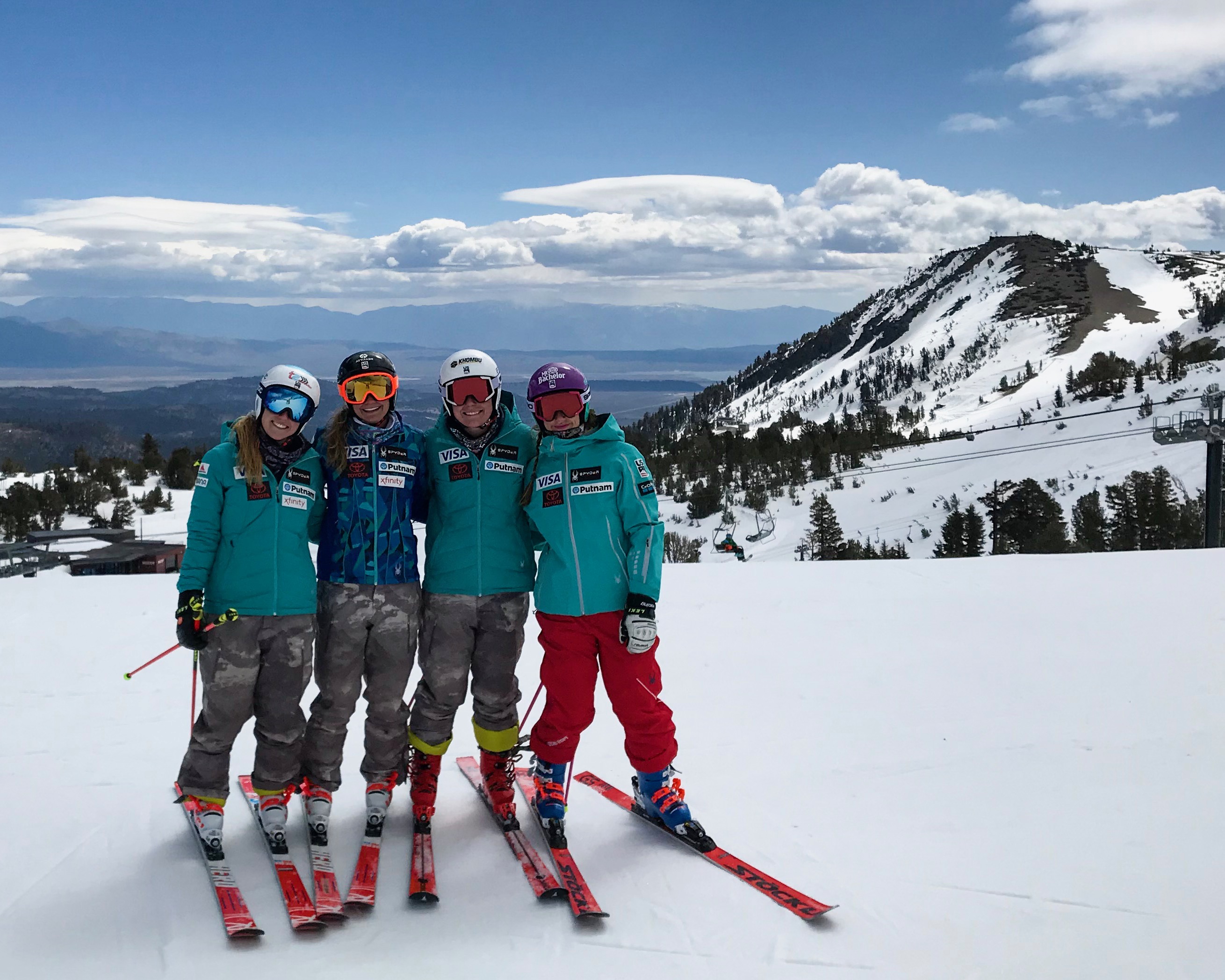 Johnson poses with teammates at a spring camp at Mammoth Mountain, California. "I’m scared. I’ll admit it. I’m scared to the point of waking up in a cold sweat forcing extension of my knee to try to prove something to myself" says Johnson. Members of the fastest women's downhill team in the world during the 2017-18 season smile for the camera during their first speed camp of the 2019 season in El Colorado, Chile - just a few days before Breezy's season-ending fall.