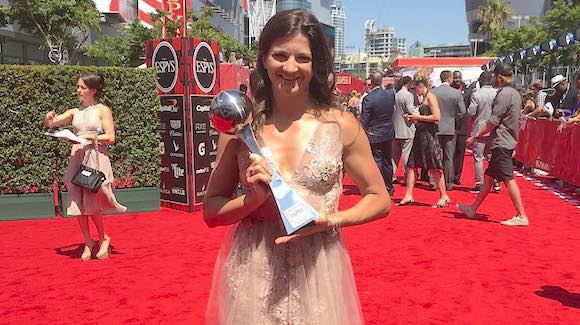 LOS ANGELES, CA (July 16, 2015) - After walking the red carpet at the STAPLES Center in Los Angeles, CA with celebrities and other sports stars on Wednesday night, Kelly Clark (Mammoth Mountain, CA) was surprised with an ESPY award before the show.

The ESPYS commemorate the past year in sports by "recognizing major sports achievements, reliving unforgettable moments and saluting the leading performers and performances." Clark was nominated for Best Female Action Sports Athlete because of her results this season, which included a silver medal at X Games, her eighth win at the Burton US Open, sixth U.S. Grand Prix tour title and fifth World Snowboarding Tour title.

This is Clark's second ESPY award. Her first came in 2002, after she won the gold medal at the Salt Lake City Olympics. 13 years later, she had been nominated seven times and the last five years in a row. "Fifth times the charm!" said Clark. "I’m really, really happy. It was nice to finally come out on top. I’ve seen a lot of things change since my first nomination, with action sports going from one category with men and women together to being now highlighted individually."

Clark was up against surfers Paige Alms and Stephanie Gilmore, and motorcyclist Laia Sanz, but the fans voted for Clark.

"I think the award is really important for snowboarding," said Clark. "When I step back, I love what it means for snowboarding to be recognized and how it can inspire people."

See all of the nominees and winners here.