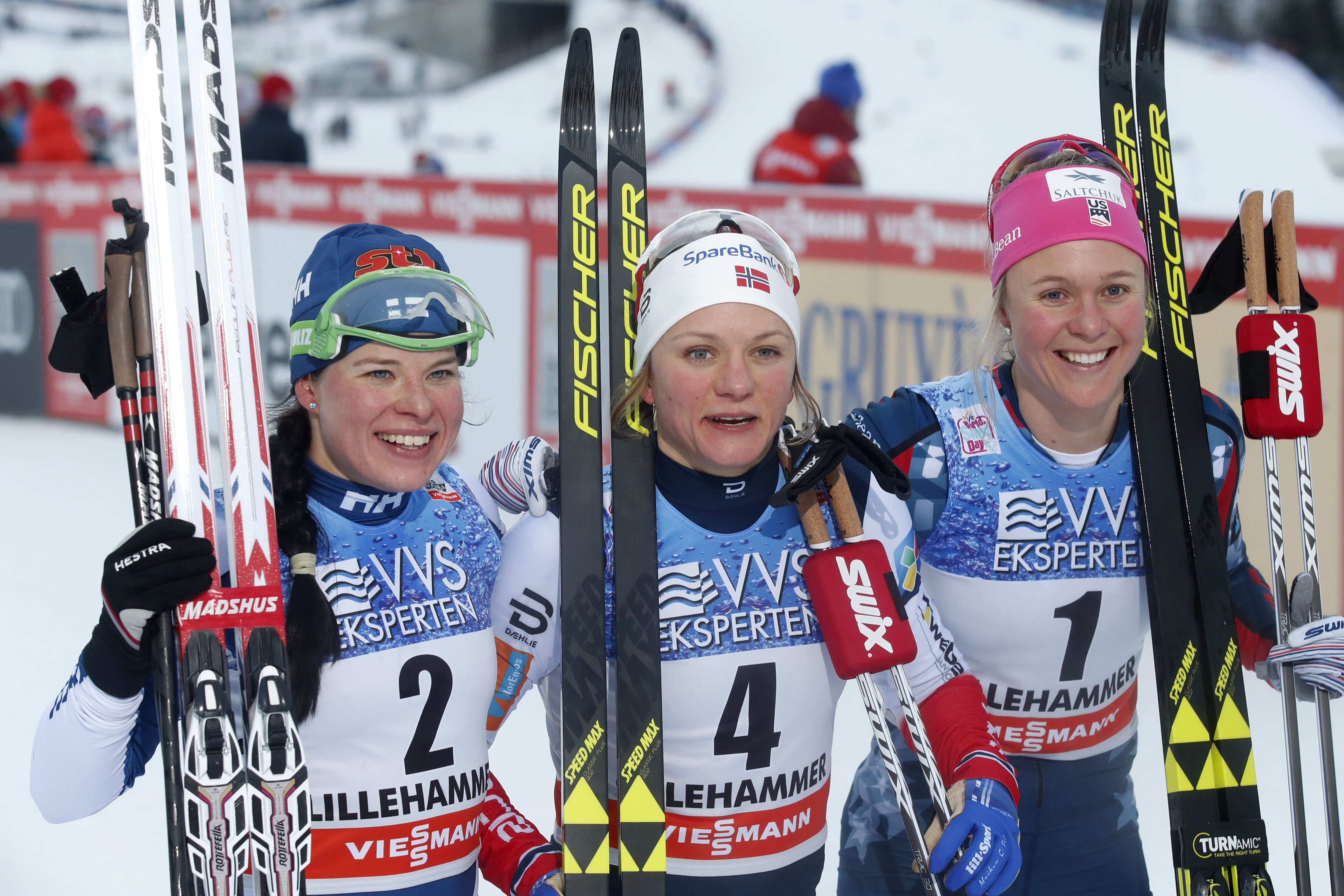 LILLEHAMMER, Norway (Dec. 1, 2017) - Any lingering doubts about the U.S. Ski Team's ability to perform in classic seem to have been dashed. For the second weekend in a row, Sadie Bjornsen (Winthrop, Wash.) cracked the podium in a classic sprint, finishing third. Jessie Diggins (Afton, Minn.), was sixth.

What was especially notable about the Americans' day was depth. Bjornsen led qualifying with Diggins seventh and Sophie Caldwell (Peru, Vt.) ninth. And for the first time in history, the Americans put three athletes into the semi finals with Bjornsen and Diggins making it through.

Diggins ended up sixth - match a career best classic sprint. Caldwell was ninth - her second straight top 10. Norway’s Maiken Caspersen Falla took the win. Johannes Hoesflot Klaebo made it a Norwegian sweep with his fourth straight victory. No American men made the heats.

“Today was another really awesome day of ski racing here in Lillehammer,” said Bjornsen. “After last weekend'd podium, I tried to keep the momentum and confidence going.”

Bjornsen had also qualified first a year ago in Lillehammer, but made some mistakes in the heats.

“Today I decided I needed to use my strengths, and that was to just go as fast as I could over the entire course, and try to ‘tire out’ the sprinters,” she said.

She drew a tough quarter final where she ended up battling Norway’s Heidi Weng. Bjornsen pushed the pace hard, sprinting Weng to the finish before laying back at the line to finish second and move on to semis. In the semis, she jumped in behind last week’s winner Stina Nilsson, relaxing a bit on the course then hammering the final hill and double-pole finish to take the win. Just past the midway point of the semi, she made a strategic inside pass on a corner, briefly getting tangled up but coming out ahead.

Bjornsen took some fatigue into the finals, but skied a smart heat. “I kept my head fighting the entire way, giving an extra push over the final climb despite barely being able to stand on my legs full of lactic acid,” she said. “Then in the finishing stretch, thanks to an amazing pair of skis, I got a nice draft and was able to outsprint Stina for third.

Diggins, whose only previous visit to a classic sprint finals came at Canmore in 2016, had the most impressive jump from last weekend where she didn’t make the heats. She skied strong to advance second from her quarter final heat, then battled with Caldwell in a photo finish to take a lucky loser spot from semi finals into the fins.

“I was so happy with today,” said Diggins, who made only her second classic sprint final. “Making the final in a classic sprint in Norway gives me a lot of confidence in how my classic skiing is coming along. I’ve been working really hard for a long time to improve that technique so today felt really good! And our amazing skis from the techs were so much fun to have on that hard course.”

Across the board, the athletes were jubilant about their skis.

“I am extremely thankful to the waxing staff for giving me what felt like the fastest skis in the world today,” said Bjornsen, “and also super proud of my teammates who had a great day!”

“We had really exceptional skis today - both kick and glide,” said Head Coach Chris Grover. “The service team kept pushing hard and found the right combination of waxes. And the wax truck is doing its job!”

In addition to good skis once again, it’s clear that preparation over the last few years on classic skiing is having an impact.

“As a team, we’ve had a focus on improving our classic skiing for a few years and it’s satisfying to see that we are beginning to compete in classic more often with the Scandinavians,” said Grover. “Sadie, in particular, has always been one of the strongest classic skiers on the team.”

Grover was quick to applaud Bjornsen’s APU Nordic coach Erik Flora, her personal coach, for shepherding her through the process.

Bjornsen moved up to seventh in the overall standings and is in second, just eight points behind Finland’s Krista Parmakoski, in the sprint rankings.

Grover was optimistic about Sunday’s skiathlon - a mix of classic and freestyle technique. Men will ski 15k on each leg with women going 7.5k.