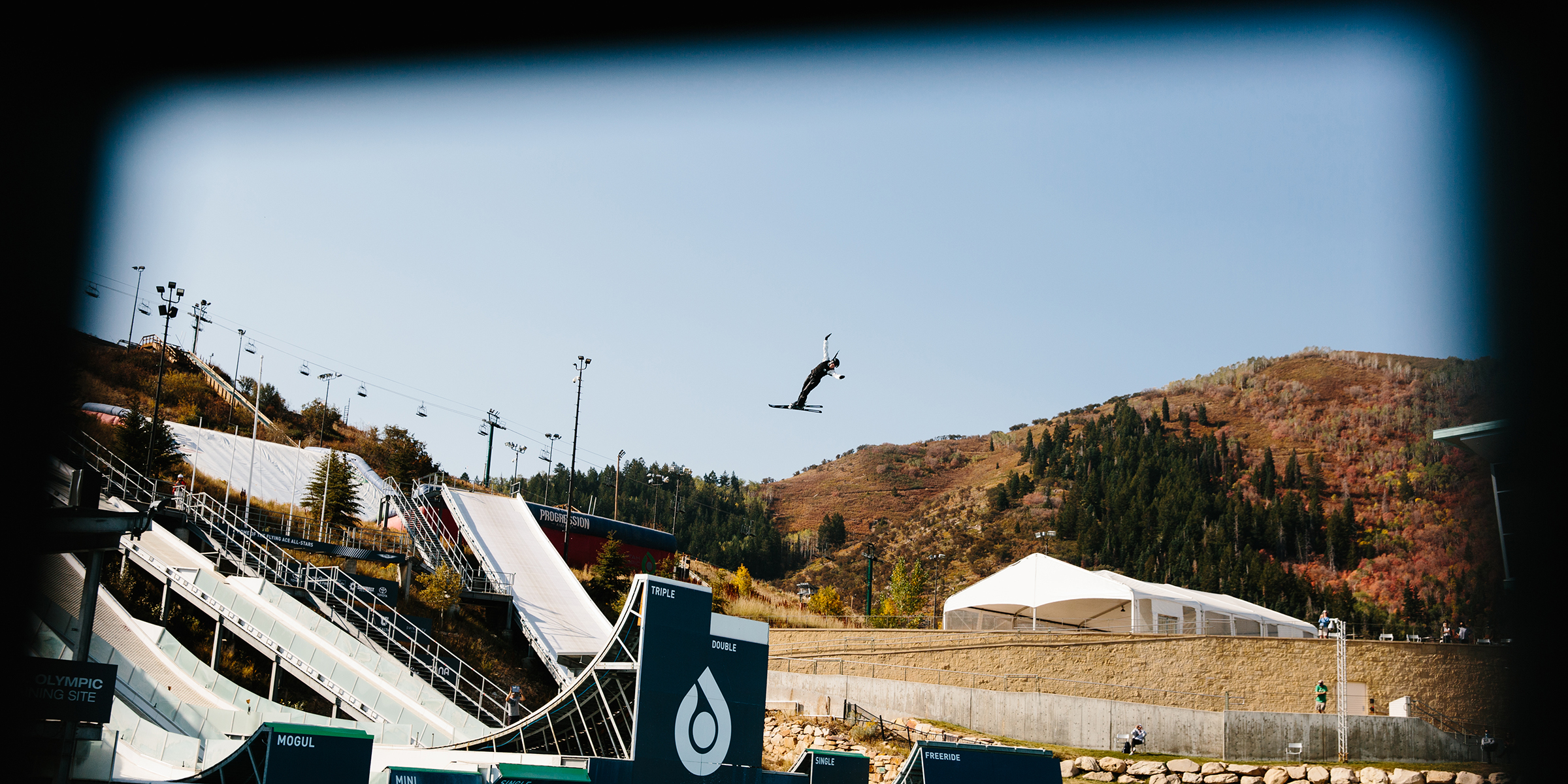 Kaila Kuhn jumps at the UOP during the last block of aerial training (U.S. Ski & Snowboard)

The aerial skiers of the U.S. Freestyle Ski Team took their last flights off of the water ramps on October 3, marking the end of their domestic training period.

Each summer the Spence Eccles Freestyle Pool at Official Training Site Utah Olympic Park (UOP) becomes the aerial athletes’ second home, and this summer was no exception. Thanks to the efforts of the UOP and U.S. Ski & Snowboard staff, athletes had consistent access to world-class training even during a worldwide pandemic.

“Four months ago, summer 2020 was a big question mark,” said Head Aerials Coach Vladimir (Vlad) Lebedev. “Fortunately we were able to run an almost-full summer program. Overall the team did really well, everyone had a lot of success.”

After several months of national and local lockdowns earlier this spring, athletes had a renewed appreciation for access to training opportunities. With COVID-19 protocols in place, athletes were able to get back to work.

Three-time Olympian and World Champion Ashley Caldwell had one of her most successful summer training periods in recent years. Ashley is known for pushing the boundaries of sport, being the only American woman currently to compete the triple - a historically male-dominated jump. Ashley did not compete triples during the 2019-2020 season, but was back training them this summer, which is all part of her plan as she prepares for her fourth Olympics in 2022.

Fun fact: Aerialist cut holes in their skis for summer training to help decrease the impact of the water. @idoneusa @usskiteam

“I’ve gone into comp season without training on water multiple times,” said Ashley. “It’s not very fun, it’s actually quite scary. Being able to train triples this summer increases my confidence dramatically going into the winter season. Taking a year off competing triples was hard for me, so I am excited to get back to it and live up to the athlete I have tried to be my entire career.”

World Cup winner Chris Lillis added a quintuple twisting triple backflip to his repertoire, ending the summer as the athlete with the team’s most difficult trick. “Chris actually learned two quints,” explained Vlad. “But we decided to focus on the double full full double full because he felt more confident on that one.”

“There is a very big difference between training quints than my quad twists,” said Chris. “It’s an upgrade in skill and focus. The trick is extremely hard, there are very few people who do it on snow. I’m mentally preparing to join that group. No American has competed a quint on snow since Speedy in the 2010 Olympics. I have a lot of work to do before I throw it in season. The biggest thing I did to get prepared is that I did 100 on water. I worked every day.

“With COVID-19 this season [and the world being so uncertain] I’m not exactly sure where I’m going to throw it,” he added. “It will be whenever I am ready. My goal is to train it on snow and get it to the point where I am ready to compete and win events with it.”

“Considering we have World Champs this year, [having three quads] puts me at advantage,” explained Justin. “This will only be my third winter doing triples and didn't seem like it was going to happen for me to get five twists on snow this year, especially the way it was going on water. Vlad and I weren’t  sure if it was the right quint twist for me, so I will experiment next summer some more.”

Quinn Dehlinger, who made his U.S. Ski Team debut last season, started jumping off of the triple. “Quinn had a great summer,” said Vlad. “He got in a lot of numbers, upped his DD and the quality overall of his jumps looks really nice. He did qualify some triples to bring to snow, so he may compete those later this year, but it isn’t necessary at this early stage of his career. The gap between doubles and triples is large and usually two or three years.”

Megan Smallhouse and Kaila Kuhn, who also made their U.S. Ski Team debuts last season, focused on their doubles, and worked hard all summer on the ramps and tramps to prepare for 2020-2021. “Despite facing some challenges due to COVID-19, our team was still able to have a great summer of training,” said Kaila. “I, along with my teammates, have been working on perfecting our jumps for snow while staying diligent about the COVID-19 protocols in order to maintain a safe training environment. I’m very happy with the improvements I’ve made in my jumping this summer and I’m excited to take my jumps to snow!”

Madison Varmette had another successful summer and used her spring quarantine to focus on her at-home fitness. This summer marked Dani Loeb’s first with the Team after being nominated this spring.

Although athletes are no longer hucking themselves into the pool, they are hard at work on dry land for the month of October focusing on strength and conditioning. The team will then set off for Finland to train on snow ahead of their scheduled World Cup opener in Ruka. This will be the first time in recent memory that Aerials has traveled out of the country to train on snow.

“With the world the way it is right now and all of the unknowns there’s stress but I’m excited to jump [on snow],” said Justin. “I haven’t done any traveling for training in my career, so I'm excited to do that.”