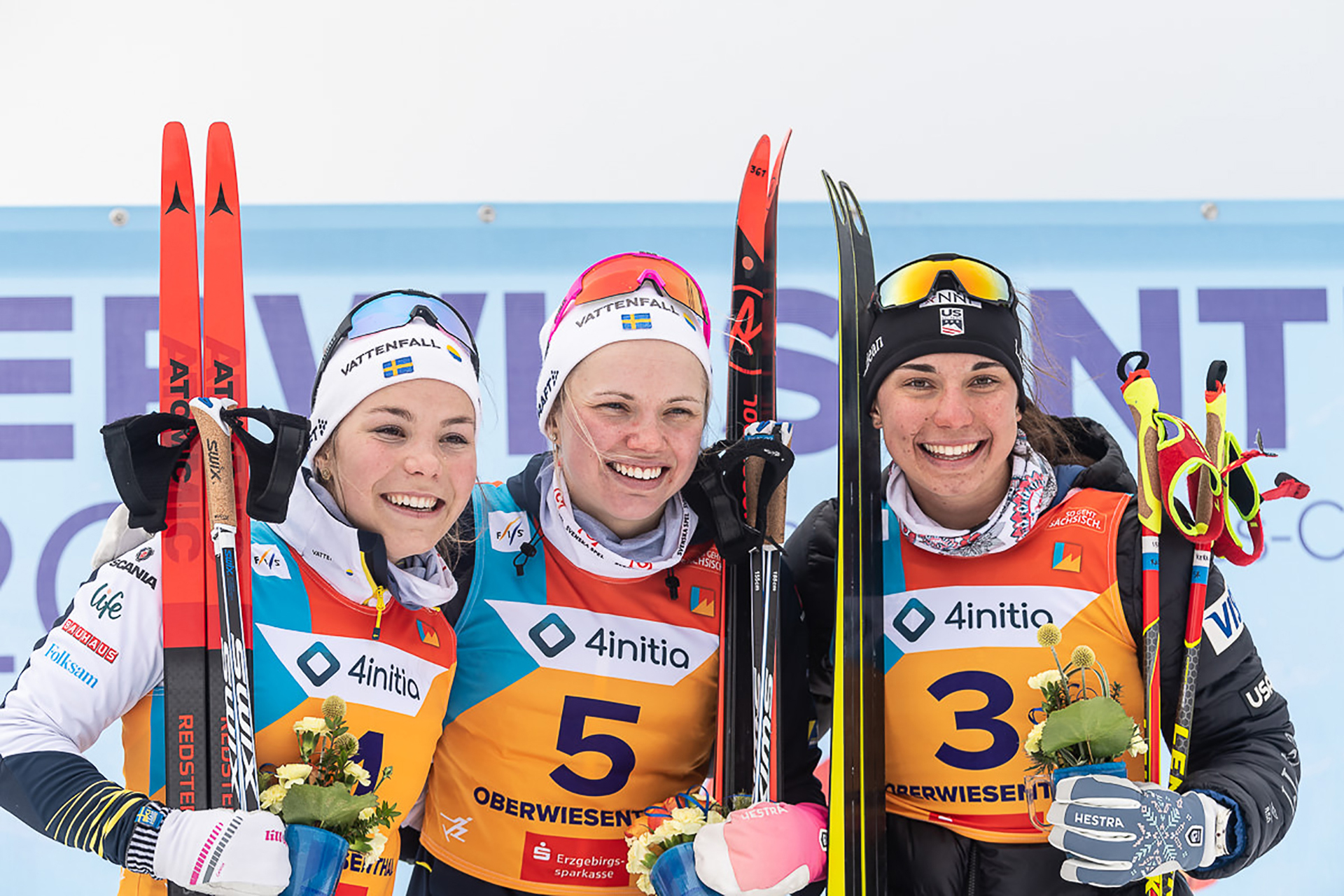 Julia Kern won the bronze medal in the freestyle sprint at the FIS U23 Cross Country World Championships in Oberwiesenthal, Germany, Saturday. Sweden went 1-2 with Emma Ribom winning the gold, and Johanna Hagstroem taking the silver.

"I felt really strong all day,” Julia said. “Our skis felt awesome all day, and my family from Germany was out cheering, which made it extra special.”

It was an extra special day to finish 🥉 at @jwsc2020 in front of my family who taught me how to ski on these ski trails ❤️ (swipe right to see mini me skiing ☺️) ⁣ ⁣ Thanks to our incredible staff and team for the ripping skis ⚡️ and loud cheering through some crazy weather! Psyched to see what this team can accomplish together this week!! 🇺🇸 #gonnf #usa #home #fullheart (📷: @flyingpoint )

As the quarterfinals got underway, the venue was hit with a strong snow squall that dropped a couple of inches of snow, slowing the course conditions. As the heats progressed and the sun finally returned, the course conditions improved. Regardless, racing in quarterfinal heat 5, Julia won as heavy snow fell, charging up the final climb to easily glide across the line with the victory. For Hailey though, she finished fifth in her opening quarterfinal heat - the fastest of the five heats - just 0.24 out of the Lucky Loser position as the heavy snow started to fall. She finished 22nd overall.

Meanwhile, the men’s quarterfinal heats got off to a slow start as heavy snow fell and the first heat saw the top qualifier disqualified for a false start. Zak, racing in heat 3, finished fifth and did not advance to the semifinals. He finished 22nd overall.

In the women’s finals, Julia got boxed-in off the start and settled into fifth position. On the first climb, she tried a move to the inside but got boxed in again. “We learned from watching the juniors (Saturday) that it is really hard to pass,” Julia said. “So my strategy all day was to have the best start possible and be close to the front. Unfortunately, I didn’t have a great start in the final and got boxed out.”

Cresting the top of the final climb and heading into the finish stretch, Julia dug deep, passing both Lena Quintin of France and Katerina Janatovas of the Czech Republic to secure her spot on the podium. “I was feeling really good and tried really hard to find gaps on the climb, but kept getting boxed out and couldn’t get around,” she added. “I am happy to have been able to move up from fifth to third in the end.”

The U23 and Junior Cross Country World Championships continue Monday with the junior women competing in a 5k classic, and the junior men in a 10k classic. Tuesday features the U23 women racing a 10k classic, and the U23 men a 15k classic. All races are streaming live on the official 2020 FIS Junior and U23 Cross Country World Championships Facebook page. 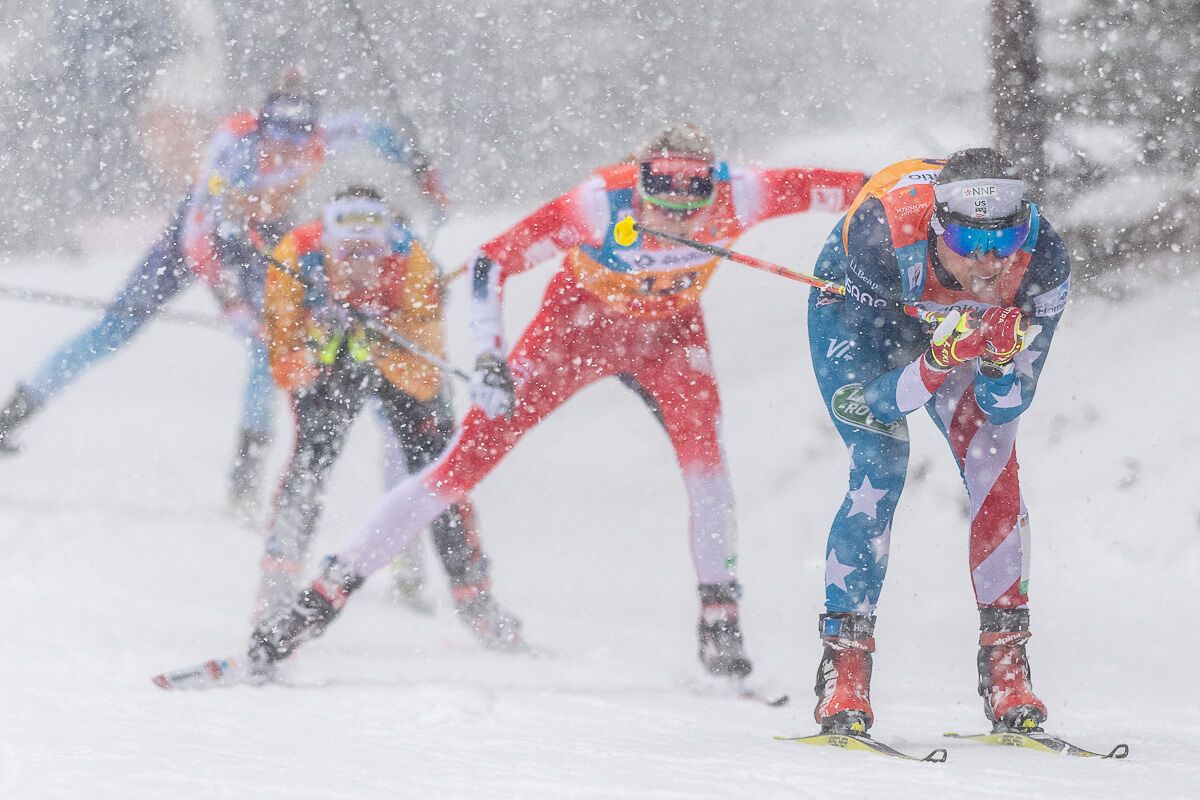 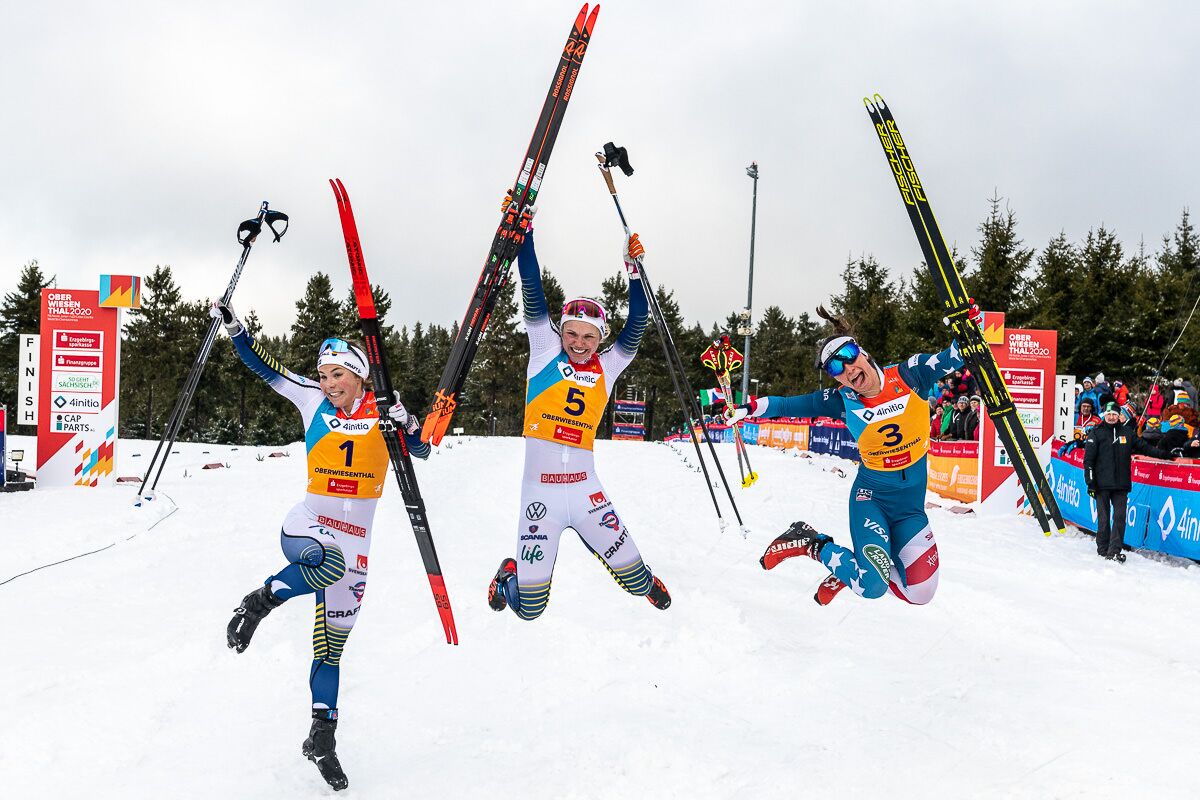 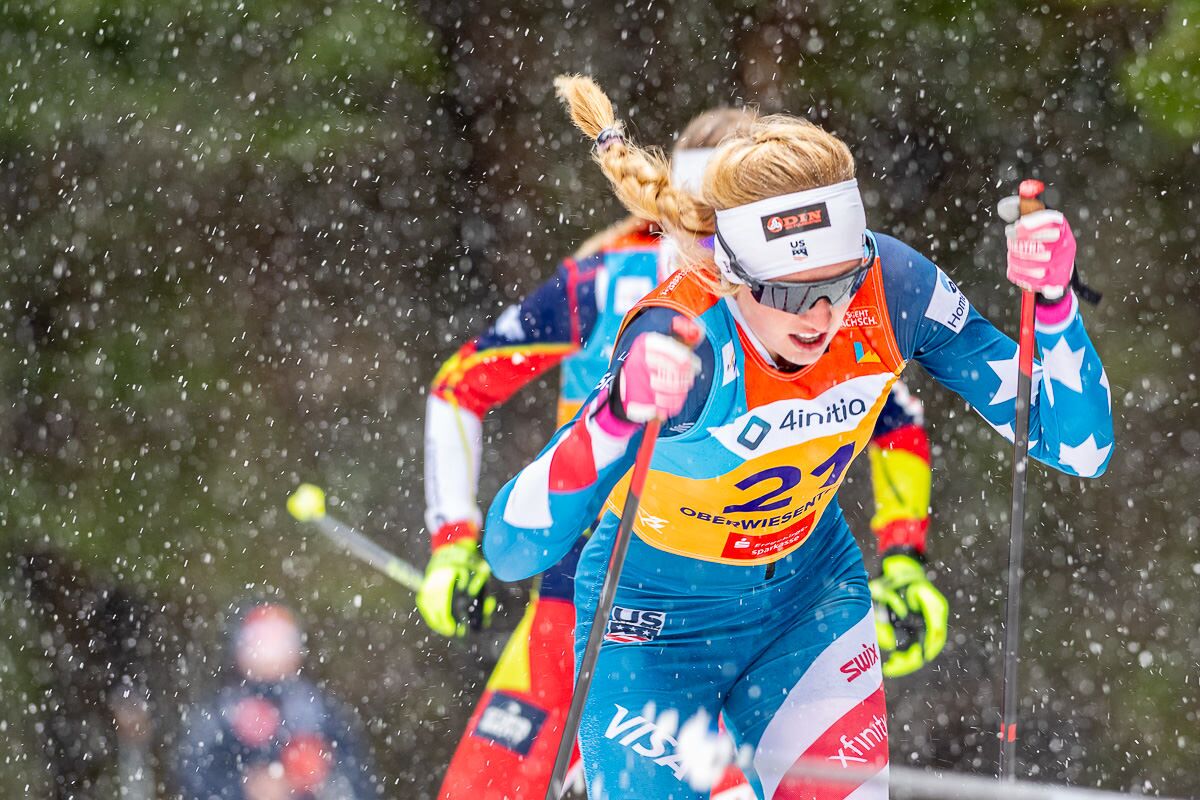 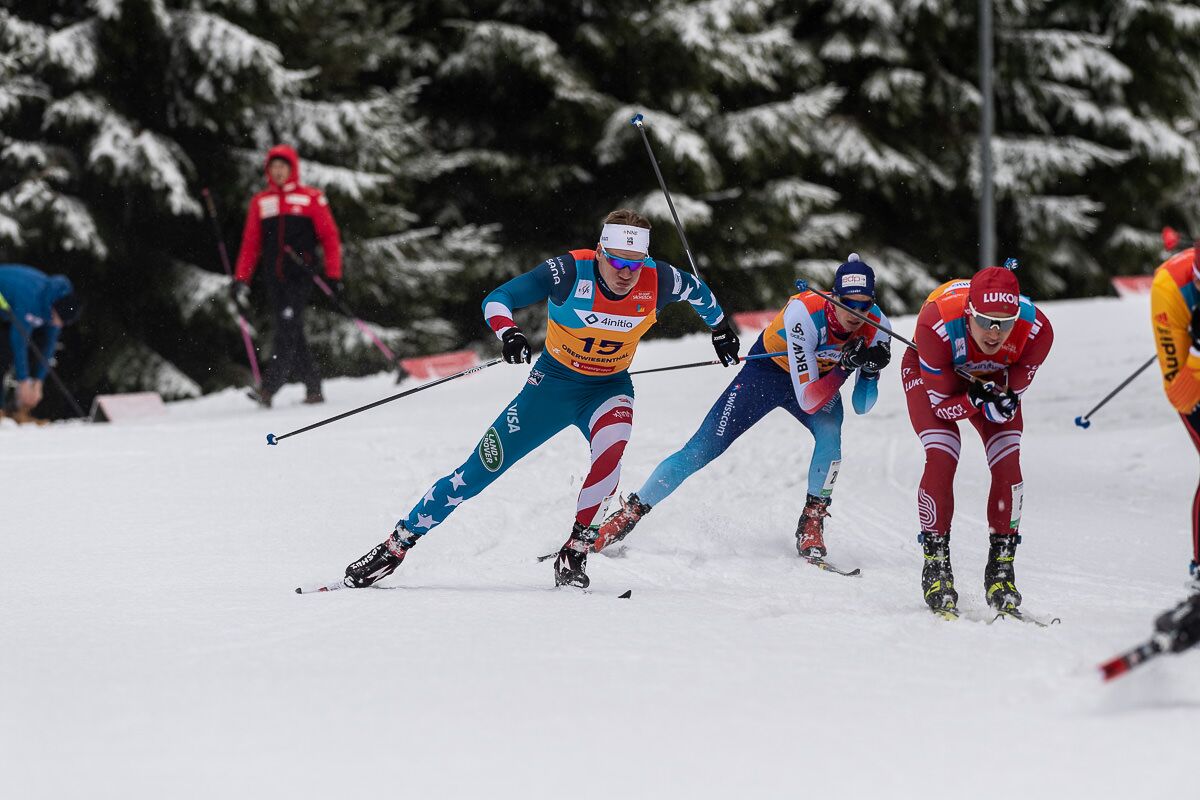 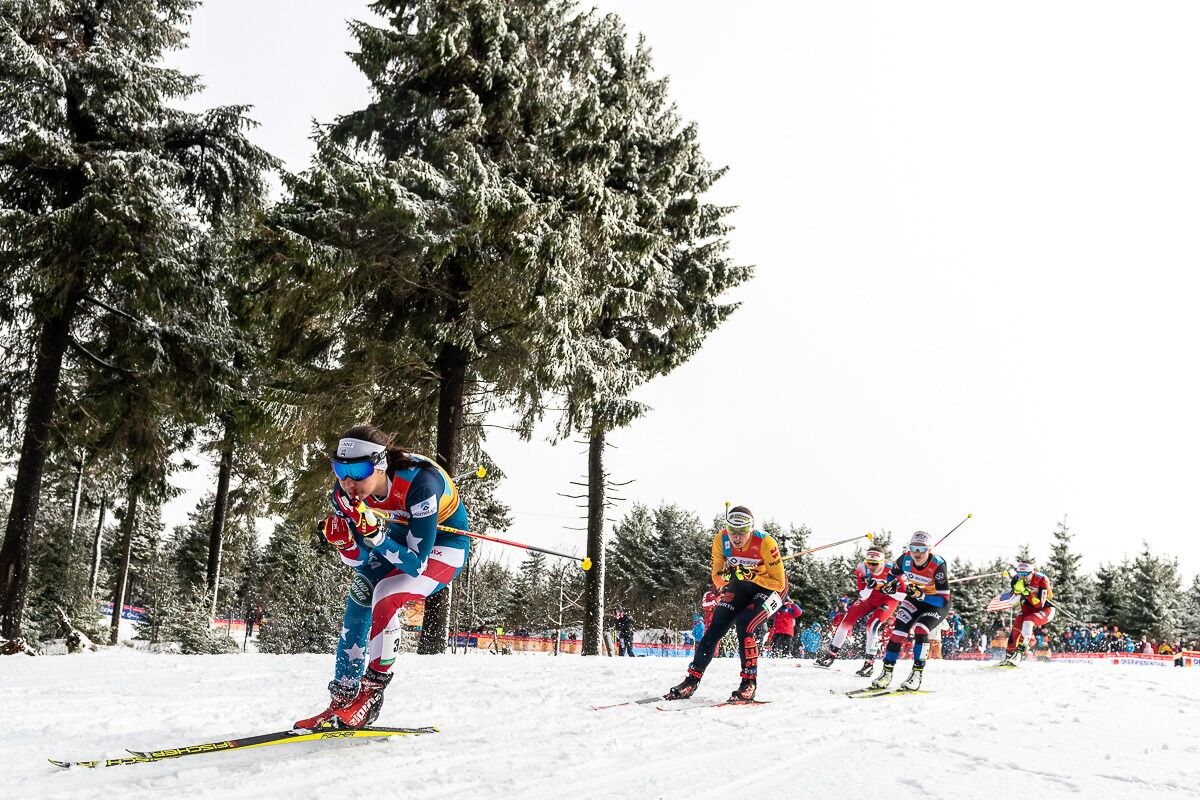 Julia Kern leads the semifinal at the World Championships. (@flyingpoint)