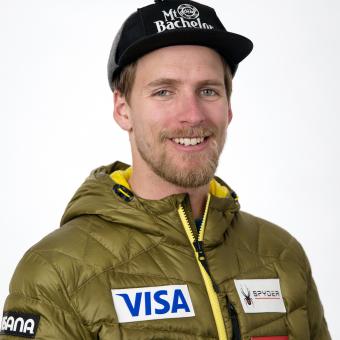 "My mother and father both raced and coached. My brother also raced so I have been around racing all of my life. I started with MBSEF around the age of seven. From there I just kept having fun and racing."

Ford sat out the entire 2014 Olympic season while still recovering from a major freeskiing crash he suffered in France at the end of the 2013 winter. That didn’t stop him from fully applying himself in both injury recovery and education. Ford went back to school and put down two solid semesters at Dartmouth. The year off also gave his teammates a chance to win a few more U.S. Championship titles; something Ford has quickly become a legend for earning. What an impressive comeback for Ford in 2015. After earning himself a top 20 result at World Championships, Ford went on to grab two more top 30 results—one each at Garmisch-Partenkirchen and Kranjska Gora—along with a 2nd place finish in the GS at U.S. Alpine Championships in Sugarloaf, Maine.

His most impressive season, though, was the 2018 season. He kicked it off with a bang, landing his best-ever World Cup top 10 and it was onward and upward from there. Ninth in Kranjska Gora, Slovenia and then ended the season with a career-best eighth place in Åre, Sweden. That kind of steady progression bodes well for 2018-19, especially considering Åre will be hosting World Championships.

In 2019, Ford had the best season of his career, finishing the season ranked ninth in giant slalom in the world.

FIRST TRACKS
Ford grew up in Bend, Ore. and started to ski at Mt. Bachelor around age two. "My mother and father both raced and coached. My brother also raced so I have been around racing all of my life. I started with MBSEF around the age of seven. From there I just kept having fun and racing." He joined the U.S. Development Team right out of high school and has been climbing the ranks ever since.

OFF THE SNOW
Ford is into skateboarding, rock climbing, drawing, snapping photos and mountain biking...and he does a lot of these activities with girlfriend and teammate Laurenne Ross. Also a big fan of filming and editing, he and former teammate Nolan Kasper would create short video edits from the road all season and post them on Ford's blog. Ford is a student at Dartmouth and probably the Pacific Northwest’s biggest WuTang fan.