A journey toward success in competitive skiing and snowboarding

SkillsQuest is a cornerstone program of the U.S. Ski & Snowboard Training Systems and designed to motivate and reward athletes in working toward and improving abilities in the key areas of emphasis. As its name implies, it represents a quest, or journey, toward success in competitive skiing and snowboarding, by focusing on skills, the critical components that make up a high-performing athlete. It includes activities and competencies for skiing skills, technique, and tactics, conditioning, equipment preparation, performance psychology and athlete management. 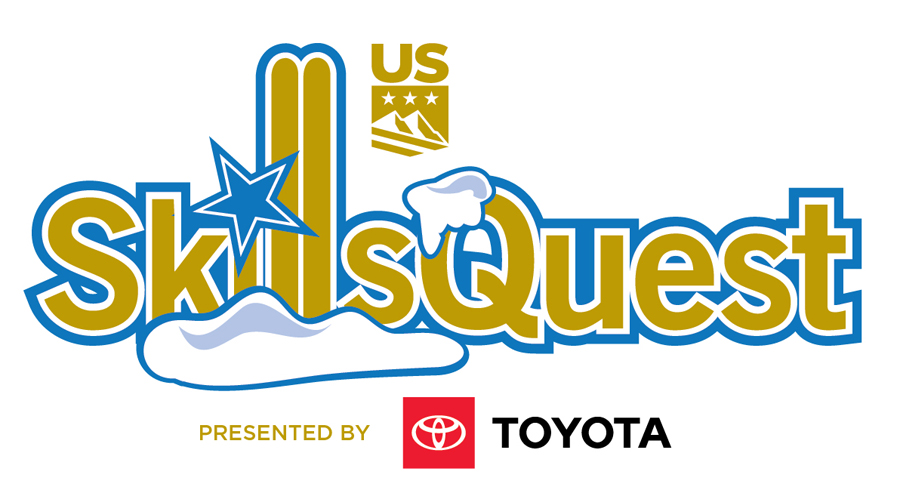 U.S. Ski & Snowboard and coaches at clubs around the country have long understood that for ski racers and snowboarders to achieve long-term success and enjoyment, they must develop into great skiers and snowboarders first, and only then they can become great ski racers and snowboarders. But answering the question of what exactly makes a great athlete, and being able to prioritize and justify the time spent developing great athletes before great racers in a results-hungry junior sports environment has challenged coaches and has set back athlete development in the United States.  SkillsQuest has been designed to overcome this challenge.

The physical demands of ski & snowboard competition require amazing strength, power, agility, endurance, and balance. Elite technical skill is supported by- and developed on the foundations of great athleticism. Well-developed physical capacities will contribute directly to long-term sporting success. An athlete’s fitness level can either support or inhibit their technical skill development by directly influencing their ability to tolerate the technical and tactical training volumes that are required for elite skill development.

The SkillsQuest-Fitness Assessment, co-developed by U.S. Ski & Snowboard and our partner High Performance Center (HPC) clubs, is a valuable tool in identifying an athlete’s current capacities across multiple physical fitness domains and developmental phases. Developing proficiency in these foundational fitness qualities will be a crucial factor in promoting effectiveness of the sport-specific (technical and tactical training) and high-performance training (physical and mental preparation) strategies to come, which will subsequently support and enhance performance throughout an athlete’s career.

With the understanding that overall fitness and athleticism is critical for skiing and snowboarding performance, U.S. Ski & Snowboard has developed a SkillsQuest-Fitness ‘Composite Scoring System’ in which the results of the individual tests are converted to points, and subsequently combined for an “Overall Score” out of a maximum of 1000 points. However, because not all fitness components are of equal importance to skiing and snowboarding performance specifically, U.S. Ski & Snowboard has developed a weighting system that maximizes the points scored in the fitness tests that are more relevant to ski and snowboard performance and training needs. It minimizes the points scored in fitness tests that are somewhat less relevant to skiing and snowboarding, but remain crucial to overall fitness development. Physical fitness, athleticism, and a love for activity can, and should, be developed at a young age through games, play, and having fun (and continued throughout life!). This will prepare athletes for the next steps of athletic development and performance enhancement - which are achieved with systematic training progressions that will take place over the entirety of an athlete’s career. There are few sports that require the broad base of physical and technical skills necessary for skiing and snowboarding, and SkillsQuest-Fitness will be an important tool in measuring, tracking, and helping athletes to maximize their physical preparedness in their pursuit of personal and professional greatness.

The Skiing Skills Assessment is a tool to measure a ski racer's skills. Junior skiers often find success in ski races without strong fundamental skiing skills. As these athletes get older, the lack of fundamental skills causes them to hit a plateau in performance. The Skiing Skills Assessment should be used along with race performance to give a more complete picture of the skier's progress and to help focus their training.

The objective of the SkillsQuest skiing skills assessment is to promote skills as a basis of technique by providing a resource where fundamental skills can be taught, measured and tracked over time with a rewards system that motivates young athletes to improve their skills. It is built on a progressive battery of drills covering each of the fundamental skills in skiing that are appropriate developmentally based on age and experience in sport. By working toward mastery in their phase of SkillsQuest, skiers will acquire the necessary skills to gain speed on the race course for the long-term.

The drills are organized by developmental phase, with a drill emphasizing each of the four primary skiing skill areas - pressure, edging, rotary and balance - as part of the assessment for the particular phase. This structure makes it easy for coach and athlete to identify relative strengths and weaknesses in the key skiing skills areas. Additionally, the drills across each row are all related, getting progressively more challenging as the developmental phase of the athlete increases. This allows athletes to continually work toward achievement while experiencing successes along the way.

Mikaela Shiffrin and Ryan Cochran-Siegle are SkillsQuest athletes. When Mikaela and Ryan were young skiers, they did a lot of skiing all over the mountain in every type of terrain and snow condition. They worked hard on their skiing fundamentals, whether it was freeskiing on their own or doing specific exercises to improve their skills. They stayed active with lots of different sports. They kept their equipment in tip-top shape. They worked on goal setting and other strategies to boost their confidence and help prepare them mentally for training and competition - including staying on top of school work. And they managed their race schedules to maximize the amount of time they could train (Mikaela only had 11 race starts as a 14-year-old so she could get more practice time in). These are characteristics of a SkillsQuest ski racer.

"Mikeala has been fortunate in having had a coach who views skills acquisition and quality training, particularly during key developmental years, as critical elements to future success. Racing was always secondary to mastery. Mikaela is continually striving for improvement. She can then race feeling well prepared, confident, and supported, which makes that part of the sport so enjoyable for her."
- Mikaela's parents, Jeff and Eileen