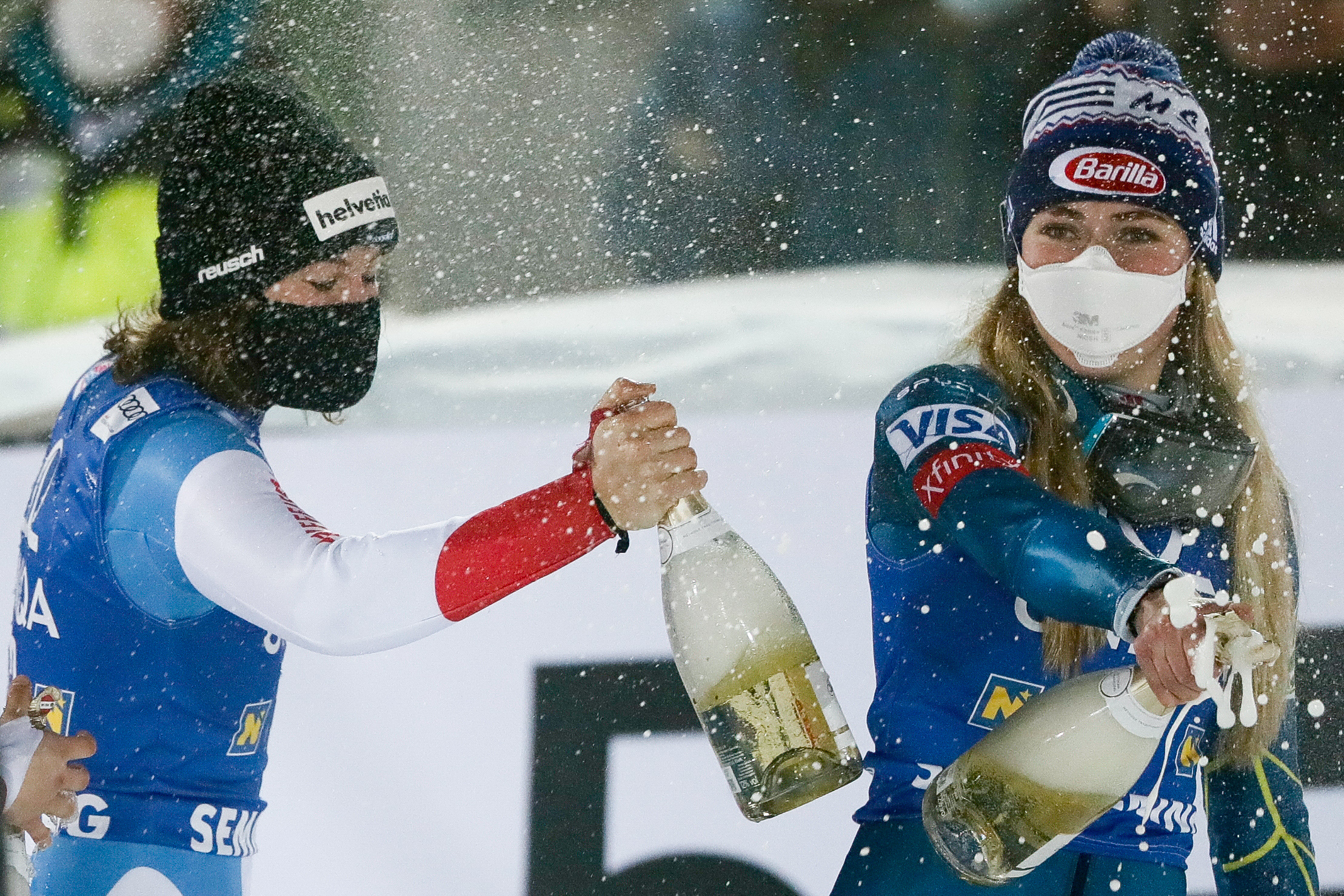 It was a banner day to finish out 2020 with Mikaela Shiffrin taking third place in the FIS Alpine World Cup slalom in Semmering, Austria, and Nina O’Brien finishing in ninth—her first top-10 result in her career.

Under the lights, Michelle Gisin of Switzerland had a heroic second run to win her first-ever World Cup race and become the first woman besides Mikaela or Petra Vlhova in 28 races to win a World Cup slalom. The last time someone else had won a slalom was Frida Hansdotter in Flachau in January 2017. Since then, Mikaela had won 19 slaloms and Petra had won nine. Katharina Liensberger of Austria finished second in Semmering.

Mikaela led the first run by just .02 seconds but had an on-the-edge second run, which lost her some time. But even with a few bobbles, she was able to score a podium finish and adjust her approach for future races when she’s leading after first run. “I forgot a bit how it feels to stand at the start and think, ‘I’m the last person to ski down this course tonight—whoopee!’” said Mikaela. “It’s a good thing. Even if I didn’t win the race, it’s a good thing to be in this position today and have to relearn how that feels. I was really pushing on the second run and I didn’t handle that very well. I made some mistakes, but then again, I could have been out of the course. I was fighting to stay in the course and trying to be tough with my skiing. I feel like that’s a really big step even though it’s not a win.”

In her last 46 slalom races, Mikaela has finished on the podium 43 times. But she acknowledges that the women are skiing faster and faster and that she still has to work on her mindset every day to stay competitive. “When I was 16 or 17, it happened and I was like, ‘Oh that works! I’ll just think like that now,’” said Mikaela. “I got in this groove and started winning. Now everything is just a little bit different. I have to find a different way to think. I can’t really move forward until I don’t try to go back.”

Land Rover U.S. Alpine Ski Team athlete Nina O’Brien had a career-best day, taking her first top-10 result on the World Cup circuit in ninth place. Nina—whose previous best slalom result was 23rd—even enjoyed a few minutes in the leader's chair, beating racer after racer. She finished out the day with a huge hug from her masked teammates, who were ecstatic to see Nina climb to the top 10. Fun fact: The last time two American women were in the top 10 was in a slalom in Crans-Montana, Switzerland in 2016 when Mikaela won and Resi Stiegler was eighth.

"I’m a little bit shocked...I can’t believe I ended up ninth!" Nina said following the race. "But I’m so happy to close out the year with a top 10 and personal best! I’ve put so much work into my slalom and it all came together tonight. It’s been crazy inspiring watching my teammates throw down these past weeks. I’m just psyched to be a part of this team and keep the momentum rolling." So far this season, the Team has amassed nine podiums across five different athletes, as well as career-best results and first World Cup points for several athletes—making it the strongest start to a season for this generation of U.S. Ski Teamers.

University of Denver skier Katie Hensien qualified for her first World Cup second run but had to hike. She finished 27th. Five-time Olympian and U.S. Ski Team alumnus Casey Puckett, who is Katie's coach, promised her that he'd let her cut his hair if she got a second run. Stay tuned for coverage of that event on social media.

Semmering was the last women’s race before the year finally rolls over from 2020 to 2021 and Mikaela remarked that while things won’t necessarily change overnight, she’s optimistic for the future. “My wishes are simple: I hope that things can come back closer to normal and the people I love are happy and healthy,” she said. “I hope that people have a really special New Year's celebration and find some hope that maybe the new year can bring some better luck or better times or some healing if you had a difficult time.”

Next up, the tech women have a short break before heading to Zagreb on January 3 to vie for the Snow Queen Trophy in a night slalom.