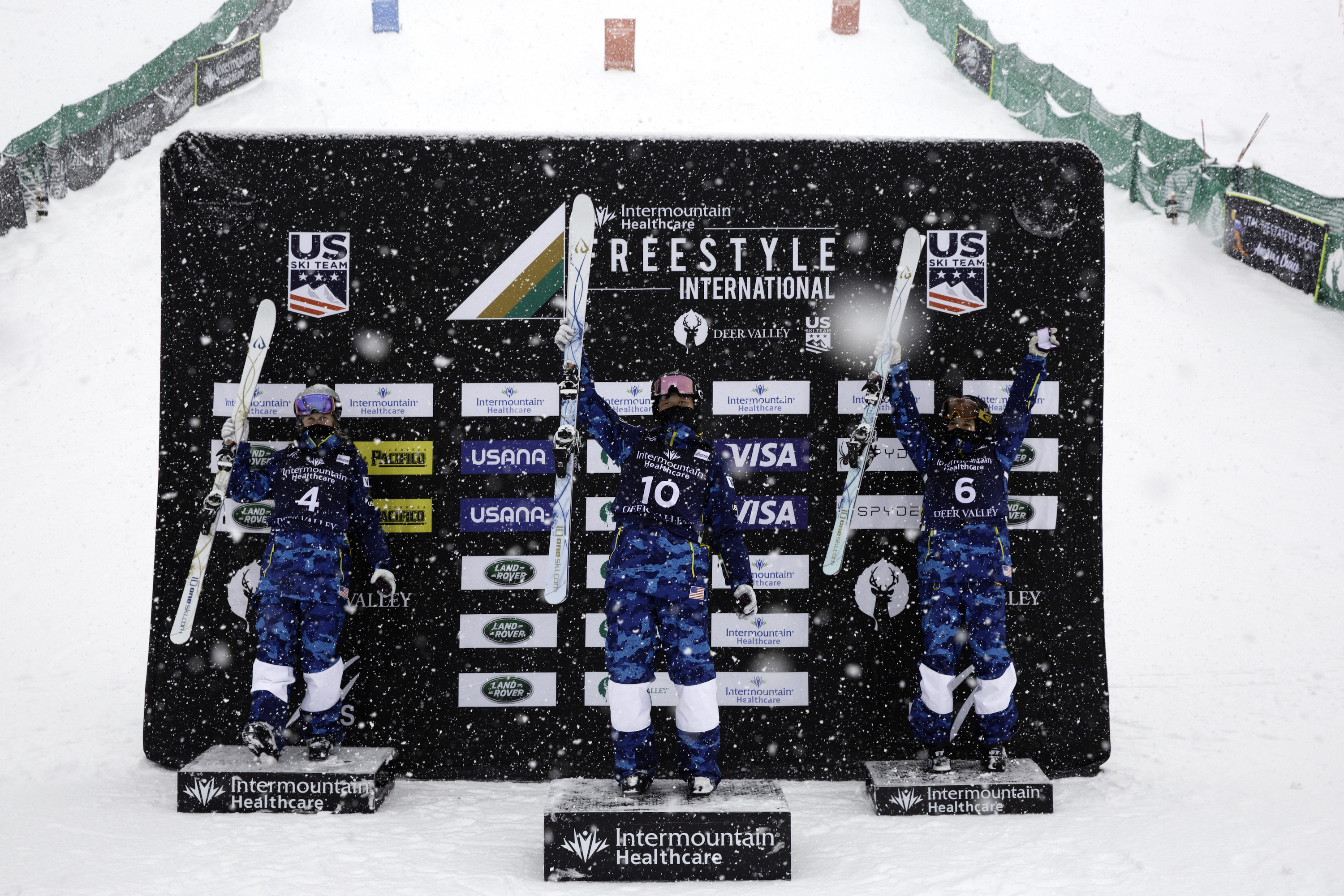 Day two of mogul competitions at the Intermountain Healthcare Freestyle International ended with a bang as three Americans, Kai Owens, Hannah Soar, and Tess Johnson triumphantly stood on top of the podium at the base of Deer Valley’s Champion course. Loads of fresh snow and low visibility didn’t stop 16-year-old Owens from capitalizing on Thursday’s career-best to earn her first-ever World Cup win (despite only having 10 World Cup starts under her belt). Owens bested her teammate Hannah Soar in the big final to take the win. This marks the first time in history that Americans have swept a dual moguls World Cup competition, and demonstrates the might of the #powHERhouse women's moguls team.

"It’s unreal, I’m feeling like I’m on cloud nine right now," said an exasperated Owens. "I’m so lucky to share it with my teammates. I put everything I had in today, so I’m just really feeling honored and excited to be here."

Soar finished the day in second after overtaking Kazakhstan’s Yuliya Galysheva in the semi-final, allowing her to move on to face her teammate Owens in the big final. Feeling a bit exhausted after multiple duals run and catering to a leg injury, Soar continued to push it on her first air, but a tiny mistake in her landing almost sent her out of the course upon exit. Soar was able to regain composure, stay in the course, and finish her run just behind Owens. Although her skiing wasn’t enough to capture her first win, it was enough for her second podium of the season and matching her career-best.

“Some of those runs were a little wild, but that’s what I needed them to be, a Deer Valley-esque, not sure if you’re going to die into the bottom air or make it across the finish line run,” reflected Soar. “After yesterday where I skied conservatively, that was a good accomplishment for me to just push it and enjoy the moment. Hopefully next year I can turn these two second-places into Deer Valley into a win.”

Tess Johnson rounded out the podium for the Americans, outdoing Galysheva in the small final to capture third and secure an all-American podium for the red, white, and blue on home soil. Johnson personally knocked Perrine Laffont out in the quarter-final, ending the French woman’s World Cup-win streak, putting herself in a head to head battle against her young, up-coming teammate Owens in the quarter-final.

Earlier during training, Johnson broke a ski and almost decided to opt-out of competition for the day, so as she rode up the lift with Owens, one of her best friends from Vail headed into the round of eight, the duo swore no matter what happened they promised put on a good show at Deer Valley.

“Tess is like my best friend and older sister,” said Owens. “We’ve been training together for the past month, so I was just ready to put on a show and give it everything I had and show everyone here and at home what we could do.”

“It was a close one, I wanted to get her, but it was so much fun and I love dueling teammates in the round of four,” added Johnson. “I got pretty emotional earlier. Ever since I’ve made the team I’ve wanted [to see a podium sweep] almost more than individual success. Sweeping the podium with these girls, its a dream come true, it really is. They’re my sisters, they’re my best friends, it feels unreal. It’s an honor to be on such a progressive, hardworking women’s team.”

The United States women once again ended the day with all competing athletes finishing inside the top 30. Following the podium, the women finished in order from Olivia Giaccio (17) Jaelin Kauf (18), Kenzie Radway (20), Sabrina Cass (24), Madison Hogg (28), and Avital Carroll (29).

On the men’s side, Bradley Wilson faced a tough competitor in the round of 16 – Canada’s Mikael Kingsbury, who has been on a hot streak since early on in 2020 and won the singles event at Deer Valley the day prior. Wilson gave Kingsbury a run for his money, coming into the second air at top speed after fighting past a few mistakes in the midsection and making a massive save upon entry. Despite a shaky entry, Wilson successfully landed his jump and sailed into the finish, securing the fastest run points. Unfortunately, his early mistakes cost him and he was unable to defeat Kingsbury who went on to capture the win for the day.

“It’s the luck of the draw when you get into that bracket, you don’t really know who you’re going to duel until the day before,” commented Wilson. “Getting [Kingsbury] in the round of 16 is usually way too early, which is a bummer, but I was really happy to put down a good run, give him a run for his money, and beat him across the line. There’s only so much you can do with him, he’s pretty amazing and a flawless skier so you do your best and hope that he loses it for you.”

Fellow Americans Alex Lewis and Dylan Walczyk qualified for the round of 32. Lewis finished 16th, a career-best. Walczyk had a clean finish but it wasn’t enough to best the day’s third-place finisher, France’s Benjamin Cavet. Australia’s Matt Graham rounded out the podium in second.

Nick Page, Jesse Andringa, and Jaelin Kauf all took hard crashes while giving duals all they had. Page and Kauf thankfully walked away unscathed. Andringa sustained an injury to his ankle and underwent further evaluation, but Gnoza stated he is confident Andringa will be oaky after a bit of time resting.

Despite conditions, Friday proved to be a great day for the United States moguls team. A podium sweep pushed Team USA further ahead in the Nation’s Cup standings, securing their lead and giving the entire crew momentum headed into World Championships at the end of the month.

“The whole team can build momentum off of a sweep like this, they can all see what they are capable of,” commented Head Coach Matt Gnoza. “They can all take a look at what happened today and say ‘next time that’s gonna be me up there.’ We look forward to everybody taking this as an opportunity to step up as a team and continue to build momentum. [The Nation’s Cup] is something everyone on the team is a part of and if we can pull off winning, it’s something that every athlete that competes in a world cup can be proud of.”