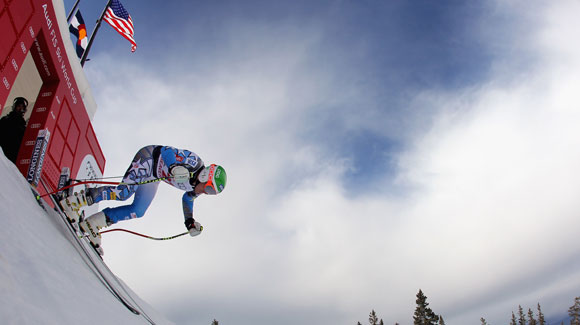 BEAVER CREEK, CO (Dec. 1 - Ski Racing Magazine News Service) - A trio of Austrians topped the final training run for the Birds of Prey downhill at Beaver Creek. Though there was some wind that played a role in the outcome, the course conditions were said to be excellent, fast and hard but with enough grip to let the racers do what they wanted.

The three Austrians covered the full range of the team on hand. The fastest was Hannes Reichelt who might have been considered a complete surprise as little as a week ago. Second fastest was near rookie Matthias Mayer who said he missed a gate - or two. The third was veteran Klaus Kroell the winner at Wengen a year ago.

“I got good wind,” said Kroell, downplaying his placing in typical fashion.

Hannes Reichelt recorded the fastest time, .07 ahead of Kroell. He would have been a surprise has he not just scored a downhill podium finish at Lake Louise a few days earlier.

“I was not perfect on the line so I have to try better tomorrow,” said Reichelt. “I was falling a little bit inside, so tomorrow I have to do that better. ...the course is very fast and you have a lot of grip so it's nice to ski down.”

Bode Miller led all U.S. finishers in eighth. Travis Ganong was 23rd and Marco Sullivan 24th in their final preparation run before their respective fan clubs arrive. “Tomorrow there's the whole BeaverFest crew,” said Ganong. “The Marco Sullivan fan club and then my fan club kind of partaking with them as well so we're gonna have a big rowdy group. Listen to the loud ones with the cowbells and the go Travis t-shirts and the Marco rocks hats, it'll be that group. You won't miss them.”

The Canadian results were unexpected as neither Erik Guay nor Jan Hudec fiinished among the top 30. Robbie Dixon led the group in 16th with Conrad Pridy placing 35th.

Most of the rest of the U.S. group pounded in solidly with Wiley Maple and Thomas Biesemeyer both making the top 30 while Erik Fisher and Andrew Weibrecht were 48 and 50 respectively. A trio of racers also declined to start in favor of GS training: Ted Ligety, Tommy Ford and Tim Jitloff.