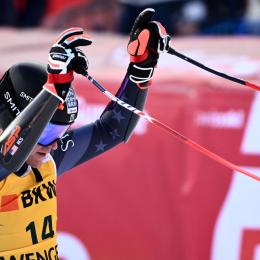 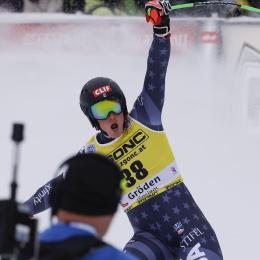 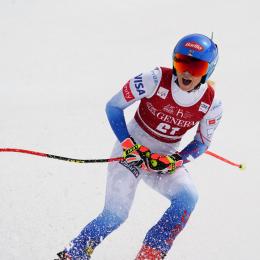 Teammate Steven Nyman called it in Dec. 2012 when he told Ganong “you’ve got next” after Nyman won the famed Saslong downhill (for the second time) in Val Gardena, Italy. Ganong believed in Steven by warming up for the Olympics with downhill seventh and super G sixth in Kitzbuehel, a personal best World Cup weekend. He then trumped his own deck in Sochi by notching fifth in the Olympic downhill to lead the U.S. Ski Team, which included heavy favorite Bode Miller. The taste was sweet, but Ganong wanted top three and knew he had the ability to make it happen. So he did. Just one week after the Olympics, the young man from Squaw Valley finished third in a World Cup super G in Kvitfjell, Norway to cap his best-ever World Cup season and safely stake his claim as one of the next great American downhillers.

Ganong really did have next—just after teammate Nyman snagged his hat-trick victory in Val Gardena, Ganong made the big leap to the top of the podium this season, snagging the victory at the Santa Caterina downhill. From there, Ganong went on to crush it at Vail/Beaver Creek World Championships, with a second-place finish in front of a massive crowd and ended up a career-best 11th ranked in the downhill standings. Ganong started the 2016 season off with a bang in Lake Louise, finishing 3rd in downhill and 4th in super G. He would go on to snag six top 10 World Cup finishes. In the 2017 season, Ganong snagged his second career World Cup victory on a gnarly, real-deal Garmisch downhill track. Unfortunately, in the 2018 season leading up to the Olympics, Ganong suffered a knee injury in Bormio and was unable to make his second Olympic bid.