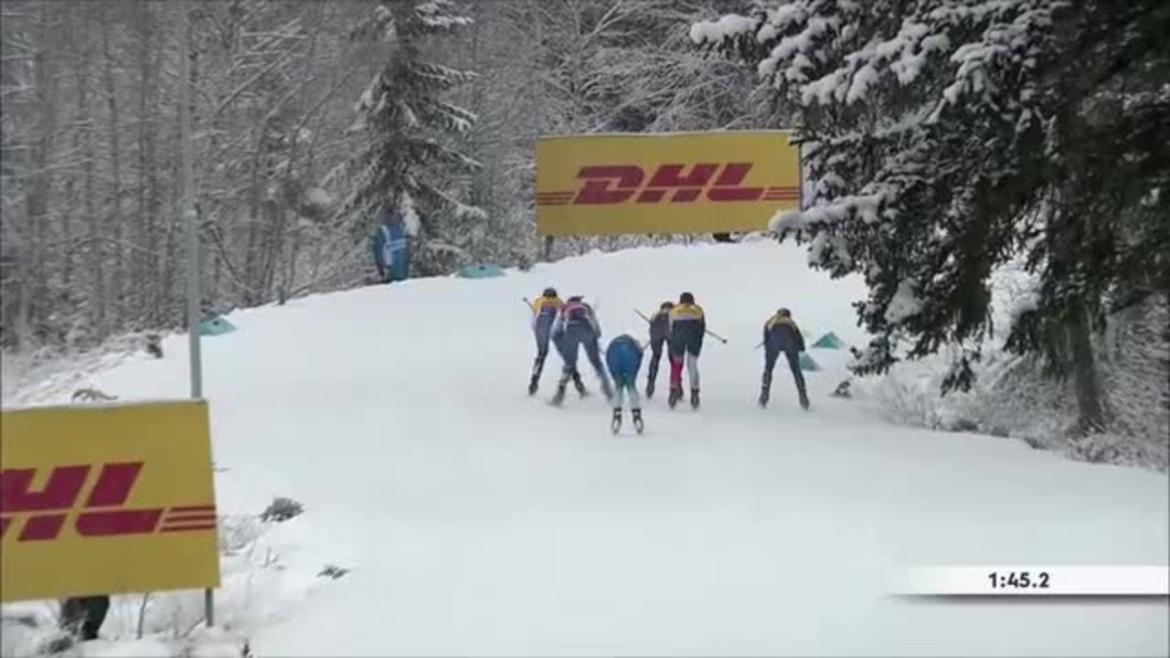 “Nobody really knew what this course was going to be like tactically,” said Diggins, who along with teammate Julia Kern pushed the pace in the opening quarterfinal heat. “It was a really cool chance for me to figure out where my strengths were on this course and how to work around this, because it is a really cool course, but also sprinting is kind of scrappy sometimes and you have to figure out how to position yourself and be where you want to be at the right moment.”

With light snow falling, both Diggins and Brennan worked their position well on the new two-lap sprint course that maintains the short punchy climb into the finish area’s long, flat straight, and single 180-degree corner before the finishing stretch. In both the semifinal, and final, Diggins fought for inside positioning on the final corner for a clear sprint line to the finish. Meanwhile, Brennan advanced to both the semifinals and finals as the Lucky Loser.

“The long uphill into the finish provided a good opportunity to make some moves,” Brennan said. "I felt that if I could get some more space for myself, I stood a chance in the final. I made a move early in the final to try to see what I had and unfortunately, was passed on the downhill into the last uphill. I didn't find the space I needed on the uphill but kept battling to the end."

“It was awesome to have two Americans in the final,” Brennen added. “Despite the lack of snow, it was cold and very good conditions for racing so I'm looking forward to an action-packed weekend.”

Overall, it was an outstanding day for the Americas as seven Davis U.S. Cross Country athletes qualified for the heats, including JC Schoonmaker and Kevin Bolger, who finished 11th and 12th respectively. Schoonmaker finished second in his quarterfinal heat to advance to the semifinals, while Bolger advanced to the semis as one of two Lucky Losers. For Schoonmaker, it was his second-straight semifinal sprint appearance after finishing a career-best seventh in the classic sprint last week in Ruka, Finland.

"That course was super fun," Schoonmaker said. "I’ve never raced on the old Lillehammer course... it would’ve been cool to race on the one that was used in the Olympics, but still a sweet course that skied super well in the heats. I thought the race went great and was really happy with it. I would’ve liked to have squeaked into that final, but was just missing a little bit of steam in that last 100 meters. Super pumped for Davos now!"

Ben Ogden qualified for the heats, finishing 30th. Luke Jager was 33rd, Gus Schumacher 41st, and Logan Hanneman 45th. Kern finished third in her quarterfinal race and just missed advancing to the semifinals as one of two Lucky Losers, and ended up 13th; while Hannah Halvorsen advanced to the heats and was 28th. Hailey Swirbul was 42nd, Movie McCabe 56th; Katharine Ogden 61st, and Sydney Palmer-Leger was 62nd.

“It was so cool to have so many athletes in the heats,” Diggins added. “It's just so motivating when you know you're there with your team and a bunch of people having a great day...it's a very cool feeling.”

Racing on another cold day with light snow falling, the Davis U.S. Cross Country Team tech crew once again rose to the occasion, delivering fast skis for the athletes.

“It was really impressive how amazing our skis were (today),” Diggins added. “That's always huge because you don't win alone, and you don't lose alone, everything we do is as a team and all the pieces of the puzzle have to come together to have a good day. So I’m just feeling really really thankful to our coaches and techs for getting that piece of the puzzle totally nailed.”