"From when I was young, it was always my dream to do this. I still think I have a lot to give to the sport." 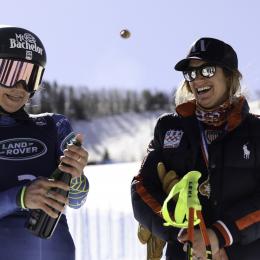 McKennis Duran and Ross Hang Up Speed Skis, Move On To Next Adventure
April 09, 2021 After a March 2013 crash in Garmisch-Partenkirchen that shattered her right tibial plateau into about 30 pieces, McKennis came back strong in 2015 with eight finishes in the top 30 and three in the top 15. McKennis cemented her strong comeback from injury, finishing 13th on the same Kandahar piece she sustained injury in 2013, and capped the season with a strong 12th place finish at World Cup Finals in Meribel and her first U.S. Championship title, in super G at Sugarloaf, ME. In 2016, McKennis snagged four top 20 finishes, including a season-best 11th place finish at La Thuile.

After struggling with an injury that had her sidelined for the 2018-19 season, McKennis is back in downhill and super-G gates and is looking forward to returning to World Cup competition in 2019-20.

FIRST TRACKS
McKennis grew up on a cattle ranch, but she lived close enough to the mountains for her future career path to make sense. Her father, Greg, took her to Sunlight Mountain Resort in Glenwood Springs, CO before she had even turned two. She began racing at age five, following her older sister, Kendra, who later competed on the FIS (minor league) level for two seasons. When she was nine, McKennis joined Ski Club Vail, the club that was nurturing the all-around skills of Alpine star-in-the-making Lindsey Vonn. McKennis watched in awe and took some valuable mental notes as the U.S. Ski Team phenom, who was five years older than her, tore down the slopes. After several years of bouncing around different ski clubs in Colorado, McKennis landed with the Aspen Valley Ski Club.

OFF THE SNOW
McKennis was a competitive equestrian and competed in jumping, cross country riding and dressage until she was 15, hence her appreciation of country music. When she’s not skiing or riding, you can find her at the local fishing hole, ripping on her mountain bike or enjoying the view from a tent. Also, McKennis and her dad regularly float the Colorado as well as any other stream they can find with rapids.